THE IMMACULATE CONCEPTION CHURCH OF THE GREEK MELKITE CATHOLICS The Immaculate Conception church  was built in 1942, when counted very few houses and buildings. In fact, at one of the lateral altars, the "prothesis", the picture of the birth of Christ has the date of September 1942 as well as the icon of the Virgin Mary with the Child behind the main  altar.

This church is called in Arabic language "Al Azrah al Tahira" (the Virgin the All-Pure) but from the foundation it is known  also by the French name of "IMMACULEE CONCEPTION" to honor the dogma of the Immaculate Conception proclaimed by the Pope Pius IX on .

The engineer-architect was greek-catholic of the parish of "St Mary  of Peace",  in Garden  City. His name was Naoum Shebib. He became famous when he built the (187 high) on , which was inaugurated on , during the government of President Gamal Abd El Nasser. Our church was one of his first works. He built also Saint Catherine's church of the Syrian Catholics near as well as Sainte Thérèse's church of the Maronite community of .. Among  his main civil works are worthy to be mentioned: the new building of the Arabic newspaper AL AHRAM (founded in 1875 by the greek  catholic family Takla) and the two first skyscraper apartments  of . (For more information visit the site of Mr. Samir Raafat: http: WWW. EGY. COM / ).

Unfortunately he did not see  his name on a commemorative marble plaque, as he could expect. He emigrated to in 1971 and died there in 1985, at the age of 69 years old. However, the  church of the Immaculate Conception has at its entry his name carved on marble to perpetuate his memory.

The Greek Catholic commander Thabet Thabet has been the main benefactor, offering in 1940 the sum of 3000 Egyptian Pounds (according to oral information)  for the construction of the church, the  parish priest's house and the which is behind the church.. Thabet Thabet died in and his body was transported to to be buried under the Immaculate Conception's church  in acknowledgement of his generosity and religious attitude towards his Melkite Catholic Community. We recall on the way  that Thabet Thabet had commissioned Naoum Shebib in 1958 to build the highest first skyscraper of apartments in Egypt, a building of 30 storeys, the "Belmont Building".

Another greek catholic commander, Elias Habib Toutounji, executed the testament of  Thabet Thabet and contributed with his own money to complete the works. In a prophetical vision, the  Patriarch Cyril  IX Al Moghabghab - had bought in the thirties all the land around the church, when was almost a wide desert. Ten years later, Naoum Shebib began the construction of the church, which he concluded in 1942. After about 50 years from the foundation, the parishioners decided to restore the church. The restoratoin was executed during the period 1992-1995 under the  supervision of the engineer Edward Youssef Kadi while the  repairing works of the arcades cracked by a recent earthquake  (1992) were under the responsibility of our parishioner the Engineer Georges Habib El-Hag, deceased in in 2000.

Some of the byzantine icons have been painted by the greek artist Wassiliou, who has many works in several churches and  chapels of while the big painting representing the  Holy Trinity in the sanctuary was made by the artist Lambert. Among the angels we see a girl dressed in blue color, Doris, Youssef Toutoungi' daughter, deceased when she was 15 years old. Her parents Youssef and Alia offered this painting to the church in memory of . On both sides of the painting we read in Arabic and French the prayer "Hail Mary" in a developed commentary.

The faithful of the Immaculate Conception Parish number nearly 300 families of the greek  melkite  catholic community.

The first parish priest was the  Archimandrite Gregorios Agami (1942-1962/ 1972-1983) born in () of  the Aleppine Basilian Order. He was so popular that people call our church "Kanisset Abouna Agami". till now. One of his main activities was the direction of the club (Foyer) of the parish: he was teaching Arabic Language in the Senior Seminary of Maadi (Coptic Catholic)  For a long time he was also supervising the Mixed Patriarchal School of Heliopolis, located behind the church.

The second parish priest was the Archimandrite Ignace Raad (1962-1972). After a very rich and successful experience in the Ecclesiastical Tribunals, he served the Sacred Roman Rota in the  and  became bishop of Saida () in  September 1981. He left his Eparchy in September 1985. He served the ecclesiastical courts in  and , he died in in 1999.

The third parish priest was Father Adel Ghali of the patriarchal clergy (1984-1989). For one year he was the  Director of  the College Patriarcal of Heliopolis (formerly "College des Freres"). Now he is serving the Church as chaplain in a hospital in Sao Jose () and is preparing his doctorate on family pastoral.

At  present  Father Maurice Khoury is the parish priest of this church and the author of  this article. He studied Philosophy in Barazil. At the end of the studies of Theology in the Saint Anne Seminary of Jerusalem, directed by the  White Fathers, he was ordained priest in Saydnaya, the village of his parents in Syria, by the first bishop for the greek catholics of Brazil, Mgr. Elias Coueter, on August 29th 1965. He served then the Eparchy of Our Lady of Paradise in the Cathedral of Sao  Paulo for thirteen years as Assistant Pastor. With the permission of his Superiors, he has been on a mission outside Brazil since 1980. He was responsible of two parishes in Syria (Kafarbohom and Yabroud) for 6 years. He is serving in Egypt  since 1986. He started assuming the charge of Parish Priest on September 8th 1989.

He is the author of three books in  different languages, Portuguese, French and Arabic : in portuguese "Maria Rosa, o Dom de Consolar" Charism of Consolation,  and "Aida Curi - O Preço foi a Propria Vida" the price was her own life (4 editions - Edicoes Paulinas Sao Paulo); in French and Arabic "Catechism for the Solemn Communion". He published also a great number of articles and poems in the only catholic newspaper of Egypt "Le Messager", edited in both languages, Arabic and French. He is preparing a new book:  "Boutros Cassab, the Upper Egypt Apostle".

We have to mention also that next to the church there is the Dar Al Ailat (Le Foyer) which assembles the faithful of all the Patriarchate. The Dar has been built by Youssef Toutounji and his wife Alia, in memory of their two deceased children at a very early age, Henry and Doris.  Recently a new building  has been built behind the Dar by a generous  benefactor of the Community. Soon it will serve the activities of the Patriarchate  and the Greek Catholic Welfare Society.

We should mention our Choir,  founded by Sister Marie Abdelkarim of the Congregation of Notre Dame du Perpetuel Secours, who lives now in Forn Al Chubek (Lebanon). The Choir was afterwards directed by John Constandi Ackad followed by Father Rafik Greich before his priestly ordination. At present it is under the responsibility of Mr. Ashraf Shatawi. Sometimes some of its members are invited by the Opera of Cairo for recitals on byzantine liturgical songs.

We  must also mention the Mixed Patriarchal School managed with competence since 1971 by Mother Aghape Natal of the Congregation of the Sisters of Notre Dame du Perpetuel Secours.

A religious community of the Congregation of the Daughers of Mary has its residence next to the church. They arrived in Egypt twenty years ago, coming from Trivandum (India) to teach in one of our Patriarchal colleges. They are helping the Parish priest during the most important liturgical periods. They are Sisters Krupa Thomas, Udaya Kurien and Louis-Marie.

Our parish is developing in these last years a charitable activity under the name of "Matthew 25", concerned about  the service of poor, old and sick people. This group is made up of anonymous benefactors. The main purpose is above all to live in the Parish the life of the first Christian Cmmunity (confer the Acts of the Apostles 2 : 44-45 and 4 : 32-34).

This web site has been launched by one of our parishioners, Dr. Rafik Haddad,  to make known our parish and to enable all the faithful of the parish who are living in the countries of emigration ( Canada, USA, Australia, Brazill  ) to see their church and know the new developments.

So this site can be a "meeting-point" for all the parishioners, from everywhere. They will see, feel and touch our beloved church, where Our Lady of the Immaculate Conception unites us in God. 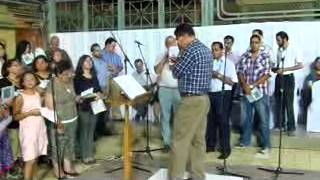